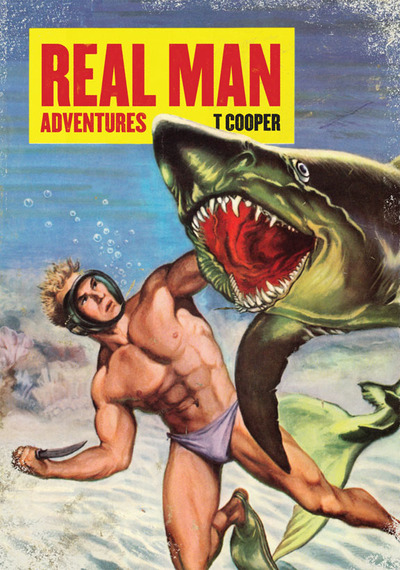 When we think man, we think dick. Not as in “he’s a dick” but as in “he has one.” However, there are men out there who defy this physical norm. T Cooper was born female. He was labeled a tomboy in his early years and a dyke in his later years. However, these words didn’t describe him. They were labels created by cultural prescriptions of the people describing him. He was a man and he is still a man.

Nonetheless, this dick thing really gets in the way. Imagine being a man without one. You would be terrified to pee in a public restroom and scared of airport scanners, of doctor’s offices, of people thinking you’re a freak and possibly beating you up, of your own family calling you the wrong pronoun. As a transgender man (FTM=female to male), T Cooper worries about all of these things and more on a daily basis.

Real Man Adventures is memoir-like, but it’s peppered with interviews, haikus, and poignant six word memoirs. Cooper’s writing is engaging and thoughtful. He will make you laugh, make you angry at the injustice, make you feel the pain of indignity, and the fear of ignorance.

I was a little turned off my the amount of anger that T Cooper has. Much of this book was a rant about how stupid and unfeeling people can be, which I agree with, but not everyone is like that! Some of us just need to be educated! It’s like Richard Wright in the 60s. Dude, I know you’re angry and you totally have every right to be, but you’re wearing me out.

Also a turn off: the low level misogyny of the book. When I say low level, I mean T Cooper is acutely aware of misogynistic tendencies (he calls himself out for it), which makes them less offensive. Perhaps these tendencies are a protective mechanism since he is in “the man club,” which is inherently misogynistic? But just because you were born as a female (and “you’ve been there, man”) doesn’t mean that it’s OK to be a misogynist. You would think that someone who knows prejudice so intimately would empathize with women. His redeeming quality is that he is in love with and respectful of his wife.

Real Man Adventures explains a world that I knew very little about. I went to a college where cross dressing was an event, I love Rocky Horror and Middlesex, but T Cooper says that these are the typical responses of people who don’t know what transgender means. Touche Mr. Cooper! I guess in a way this is the perfect book for me. I felt like I received an education. Now when someone is like “they are having a baby girl!” I’m like “how do you know it’s a girl??” These traditional gender roles are super out of date and yet well-educated new parents still fall prey to spreading the word with “It’s a boy!” Why don’t we say “It’s a baby! or It’s a tiny person that can’t tell us anything about itself yet!”

Overall I really enjoyed this book! T Cooper is flawed but not any more or less than the next person. He makes a great point about how being a man isn’t physical. It means being a good husband, a good father. There are plenty of dicks (literally) out there who don’t act like real men.

Plus, I have to admire Cooper’s bravery in publishing Real Man Adventures, when he has no idea what people will think or do when they find out he is not what society deems “a real man” (i.e. possessing a dick).

PS. There are some more thoughts on gender in this video (click below), which are fascinating and so true. I might be a little in love with her.

I read a lot, y'all.
View all posts by Natalie Ramm →
This entry was posted in Books I read and tagged nonfiction, Real Man Adventures, T Cooper, transgender. Bookmark the permalink.