Posted on 4 November 2011 by Natalie Ramm 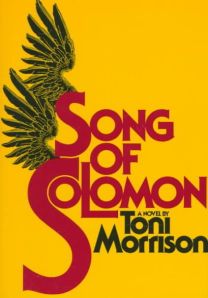 Song of Solomon explores race and gender relations in the 1960s and how they influenced black people as individuals and black culture. The novel is about a family whose roots are shrouded in mystery, largely because their ancestors were slaves. White people give the family the name “Dead” because their ancestor was an ex-slave–consequently, illiterate–and didn’t fill out a form correctly.

Macon Dead is a wealthy black man who flaunts his good fortune at every opportunity. As a way of moving up in the world, he marries Ruth, the wealthy daughter of the only black doctor in town. When Ruth’s father dies and Macon catches her in an act so despicable that he hates her from then on out. Their (I would argue “mutually”) abusive relationship is based on multiple misunderstandings and years of pent up feelings of betrayal.

Milkman, Macon’s only son, gets his name from being caught breastfeeding at an inappropriate age. He slowly takes over the story during his love affair with his cousin, Hagar, who is five years his senior. Hagar falls deeply in love with Milkman, but he loses interest and begins to explore other options. When he finally writes her a letter that ends their affair, she cracks. For six months she tries to kill him but never succeeds.

His selfishness drives others—including his best friend, Guitar—to want to murder him. He seems strangely unphased by this and repeats the clever phrase, “I’m already Dead.” Milkman’s only concerns for a large part of the novel are philandering and finding the gold of his family lore. He is just as materially driven as Macon Dead and willing to steal from his own family.

The Dead men have strikingly empty lives; they are, in a sense, already dead men. They don’t fight for any causes, like Guitar, nor do they love anyone aside from themselves. They, Macon especially, have internalized all of the negative aspects of white culture: greed, anger, and an inflated sense of self-worth.

Guitar is older than Milkman and befriends him despite the general dislike of the Dead family. Guitar is part of the Seven Days group that reciprocates killings to even out the racial disparity in horrifying deaths (e.g. four black girls are killed in the woods. So, the Seven Days group kills four white girls in exactly the same manner). Guitar believes wholly in his contribution to evening out the racial gap; his devotion and belief in what he does is fascinating.

There is so much more to say about this book! I haven’t even touched on Pilate (one of my favorite characters) or language or religion. It’s just like Toni Morrison to cram a book with so much craft and symbolism that it would take another book to talk about it all.

Song of Solomon is a beautiful example of Morrison’s genius; her ability to ask impossible questions that can never be satisfactorily answered; and also her ability to convincingly bring to life the strangest characters who are struggling to survive.

I read a lot, y'all.
View all posts by Natalie Ramm →
This entry was posted in Books I read and tagged Dead, Milkman, Song of Solomon, Toni Morrision. Bookmark the permalink.

1 Response to Song of Solomon