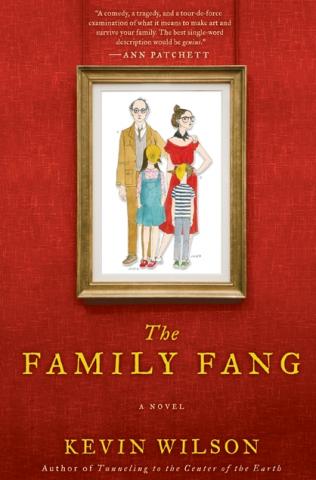 Last Friday, on my lunch hour, I wandered into the Harvard Coop (Longwood) to look for Kevin Wilson’s new book The Family Fang. I’ve read a lot about this book; its PR campaign is in full swing, so twitter is blowing up about how awesome TFF is. I thought, well I’m going to see Wilson speak at the Harvard bookstore in Cambridge (tonight!!), so I might as well read the book beforehand.

Thus, I found myself once again spending $20 on a book (which is fairly out-of-character for me). I spent the rest of the hour reading TFF on the lawn in front of my office. It immediately enveloped me in its weird hilarity.

The family Fang consists of Mom and Dad (Camille and Caleb) and their two children, Annie (child A) and Buster (child B). They are a tight-knit family of four who go out in the world and cause chaos, or art. The parents are performance artists and concoct these absurd scenes in public places, occasionally ending in an arrest, a beating, or burns of some kind. The children are part of the art, they are sometimes props and sometimes the actors that propel the chaos toward its ultimate climax.

The prologue sets the scene for the entire book: In 1985, the family goes to the candy store in the mall and chaos ensues as they create something beautiful and artistic. The kids play their part, but at the end–while their parents are trying to keep from getting arrested–they make wishes in the fountain presumably for some kind of normalcy that’s impossible to achieve in their family. The scene had me laughing out loud but the end is so melancholy that the whole thing seems more tragic than funny.

The first chapter then takes us to Annie (child A) as an adult in the present day. She’s an actress who has “cracked up” and Buster (child B) is a failed novelist/freelance journalist. They move back in with their parents after years of separation to get themselves back on track and to keep each other sane. However, when their parents mysteriously disappear, they must figure out if they are gone for good or if this is just another of the Fang’s performance pieces.

This story is extremely well written; the dialogue is quirky and colloquial. The characters are all flawed–Buster has severe anxiety and Annie is an alcoholic and the parents are so obsessed with their art that it comes first, even before family. Throughout the story, the comic scenes ease the underlying sadness in every member of the family. I read this in just a couple of days–it’s an easy read and super entertaining, but it also makes you think about family dynamics and art in a way that you probably haven’t before. It’s a mix of love, misplaced affection, beauty, strangeness, survival, fighting for sanity, feeling out-of-place, and ultimately growing up and apart from family.

I read a lot, y'all.
View all posts by Natalie Ramm →
This entry was posted in Books I read and tagged funny, Harvard bookstore, Kevin Wilson, The Family Fang. Bookmark the permalink.

2 Responses to The Family Fang